A short break of Stake Conference the week after the program was so very needed. Back to it tomorrow. I am going to teach a song, a bit crazy I know, but that's the plan. More in a bit when I get everything together.
Posted by Unknown at 7:34 AM No comments:

It was amazing, it all comes together in the end. The program was beautiful, the kids sang like angels. Wow. It was fabulous.

For singing time we played plinko, if the disc landed in 1 I got to pick the song, if 2 the kids picked the song, if 3 the pianist picked the song and if #5 they got the song in a bag for Book of Mormon Stories. Photos to follow.
Posted by Unknown at 5:02 PM 1 comment:

Singing Time after the program 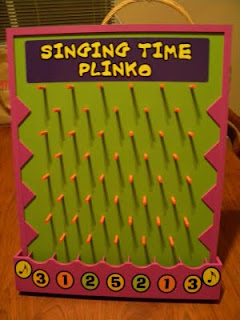 Tomorrow, after the program, there is still Singing Time. Impossible to imagine, but I have to be prepared for the singing time after the program. Generally the kids are restless, tired, worn out from singing the same songs over and over and they are ready for something new. I bought this disc game from Oriental Trading and a very clever friend of mine did some vinyl lettering to change it from "Halloween disc game" to "singing time plinko". So the numbers represent either the chance to pick a song, a style of singing or if they get number five the new song in a bag. The list of songs will all be fun songs and activity songs. They need a break. Hopefully they will really enjoy this, and the song in a bag, which I will post tomorrow.
Posted by Unknown at 7:37 PM 4 comments: 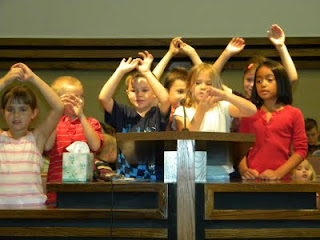 The kids in CTR8 signing and singing Help Me, Dear Father. Their teacher taught them to sign this song. They also taught it to the primary during sharing time. I wish I could remember the signs better, I have to have the kids come up every time we sing it to remind me. 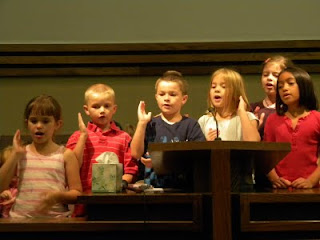 I had my fabulous nieces there to help. Michelle was in the back of the chapel with the balloons. They go up when the kids sing loudly but reverently, and go down when they sing too quiet. 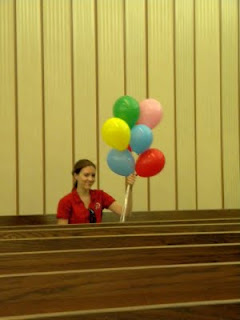 The kids really watched her to gauge how well they were singing. It was fun. 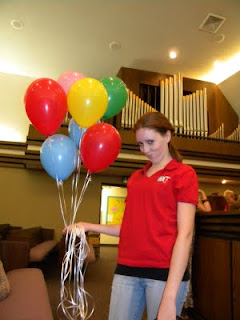 After practicing the program twice, we went outside for pizza. Yaaay! Everyone was starving. 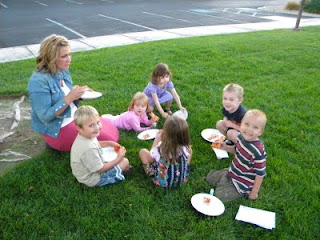 Posted by Unknown at 7:22 PM No comments:

A Practice (of sorts) and a Photograph 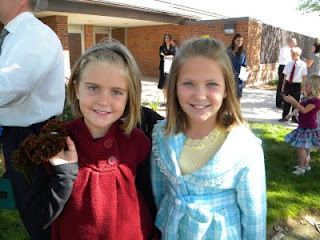 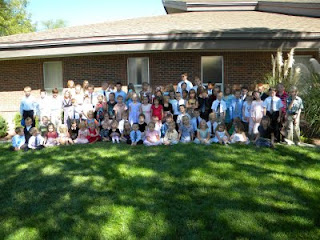 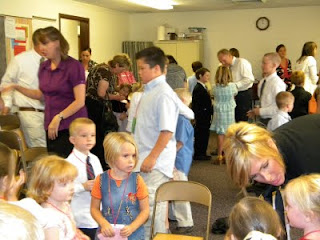 After Sacrament meeting we stayed in the Chapel to practice going through the program. We only had about half an hour because the next ward began at 11am and so we didn't sing any of the songs while we practiced. After the "practice" we all went outside to take a group photo. The primary does this every year to put on the cover of the program. It's really nice, and the kids like seeing their photo on the program. I was glad I brought my camera because it was a great opportunity for me to take photos of the kids, individually and with siblings and friends. These are great in visual aids!!!!
The last photo is the primary room right after closing prayer.
By the time we got back to the primary room it was 11:05am and the presidency had told me I would have whatever time was left for singing. Ummm, that's kind of a lot of time, with 80 kids sitting on the floor. So we sang. We went through all the songs, and I even had each class perform one song while the rest of the primary was the audience. I have to admit, by the end my voice was croaking and I was exhausted. 55 minutes is a long singing time. At the end I finally gave up on the program songs and we sang about 5 activity songs, then Scripture Power and I handed it back over to the President for closing exercises. Whew. Still, I am extremely concerned that we haven't had a proper run through of the program, the kids haven't even practiced saying their parts, just standing at the microphone. So unless the kids all come to Saturday's practice, I think we are going to be in trouble. I just need to have faith.
Posted by Unknown at 8:09 AM 2 comments:

Last Sunday I was really touched by Elder Eyring's Sunday afternoon talk "Our Perfect Example". To quote just a bit:

"any believing Latter-day Saint is an optimist about what lies ahead for him or her, however difficult the present may be. We believe that through living the gospel of Jesus Christ we can become like the Savior, who is perfect. Considering the attributes of Jesus Christ should quash the pride of the self-satisfied person who thinks he or she has no need to improve. And even the most humble person can take hope in the invitation to become like the Savior.

"How that wonderful transformation will happen is captured for me in a song written for children. I remember watching the faces of a room full of children singing it on a Sunday. Each of the children was leaning forward, almost to the front of the chair. I could see light in their eyes and determination in their faces as they sang with gusto. You may have heard the song too. I hope it will sound forever in our memories. I only hope I can give it the feeling those children had.

I’m trying to be like Jesus; I’m following in his ways.
I’m trying to love as he did, in all that I do and say.
At times I am tempted to make a wrong choice,
But I try to listen as the still small voice whispers,
“Love one another as Jesus loves you.
Try to show kindness in all that you do.
Be gentle and loving in deed and in thought,
For these are the things Jesus taught.”2

"It seemed to me that they were not just singing; they were declaring their determination. Jesus Christ was their example. To be like Him was their fixed goal. And their eager looks and their shining eyes convinced me that they had no doubts. They expected to succeed. They believed that the instruction of the Savior to be perfect was not a hope but a command. And they were sure He had prepared the way."

Today, for our opening song we are going to sing this wonderful primary song. We are practicing the program today, hopefully i'll get some photos posted this afternoon.

Posted by Unknown at 7:07 AM No comments: 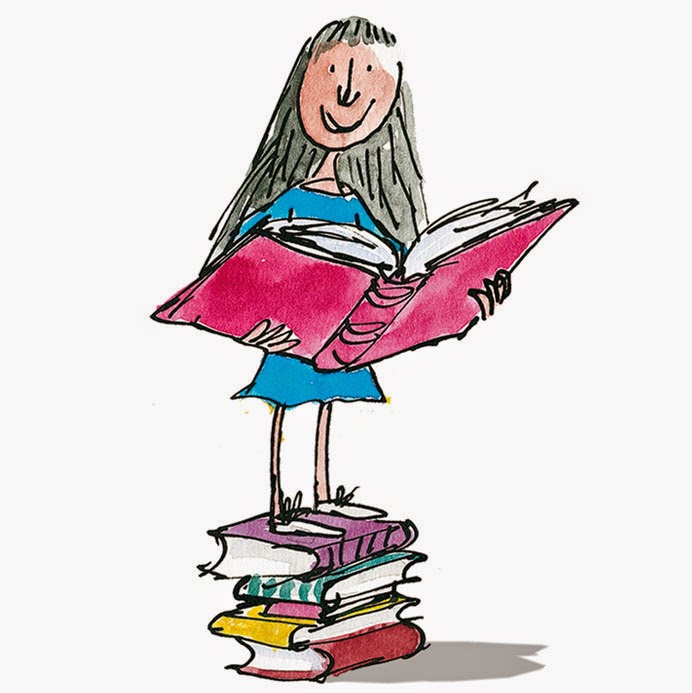 Learn what to do with your 20 minutes 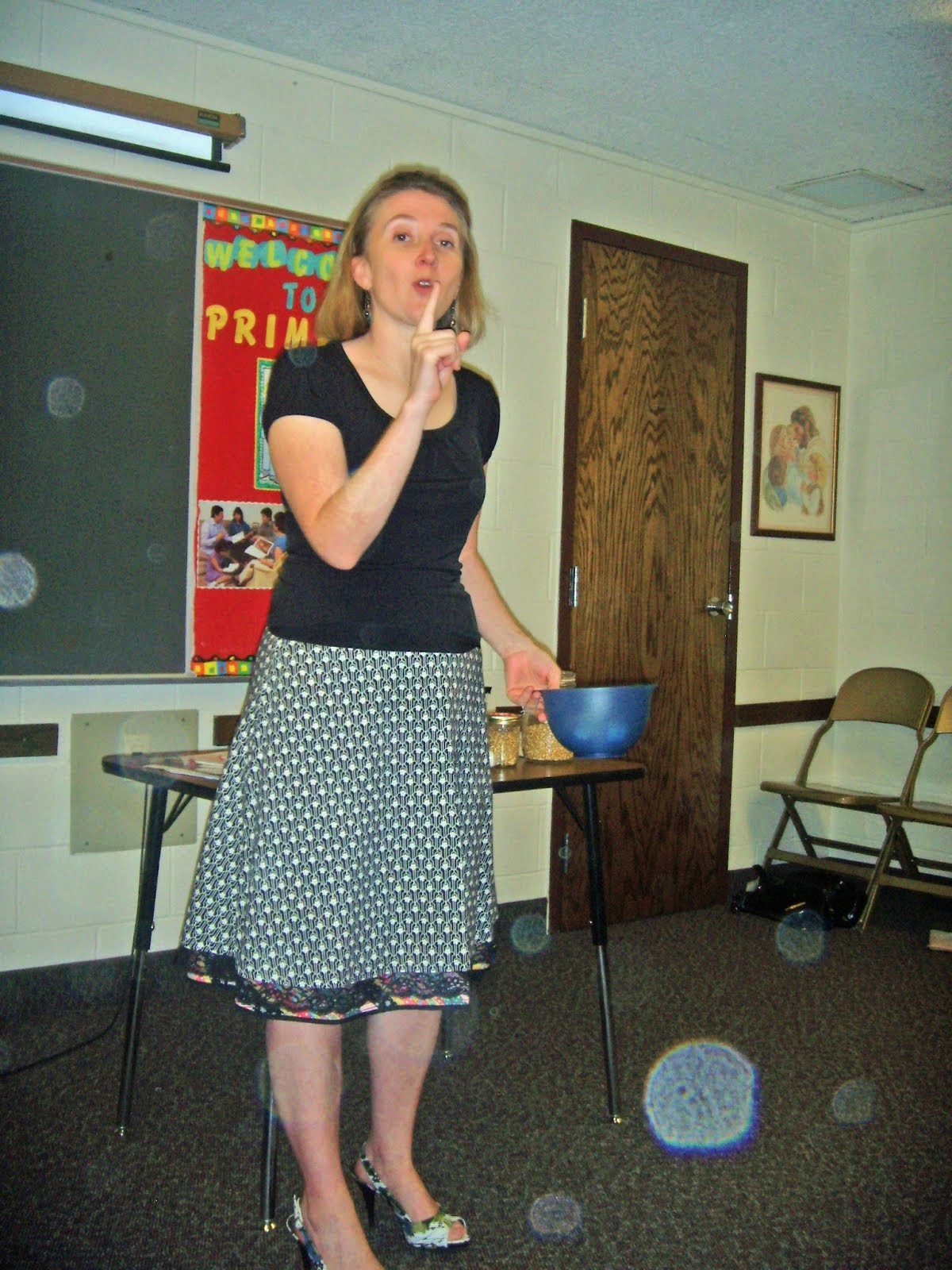 Learn how to Conduct a Song for Primary Children! 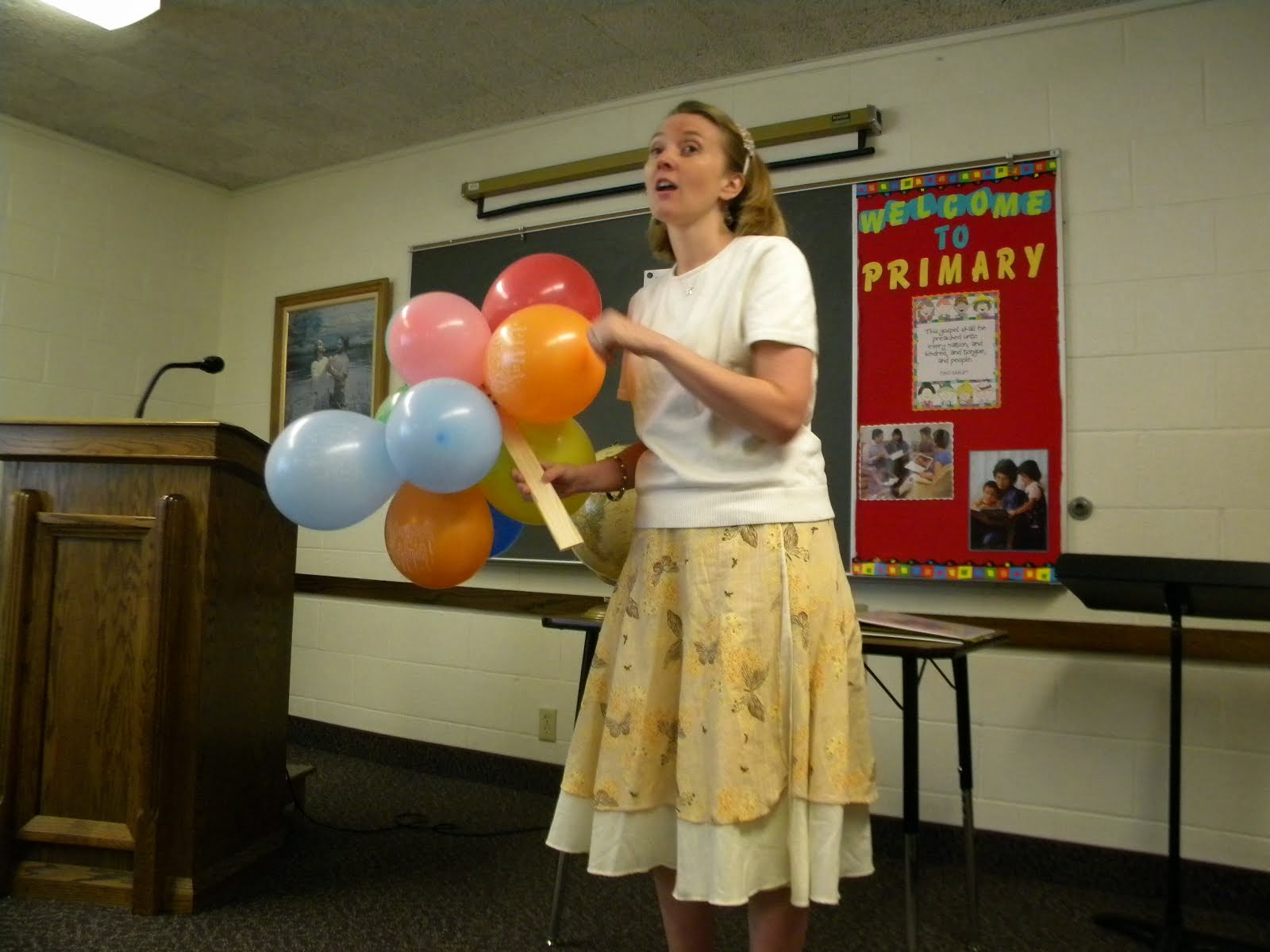 What to do the first Sunday of every year. 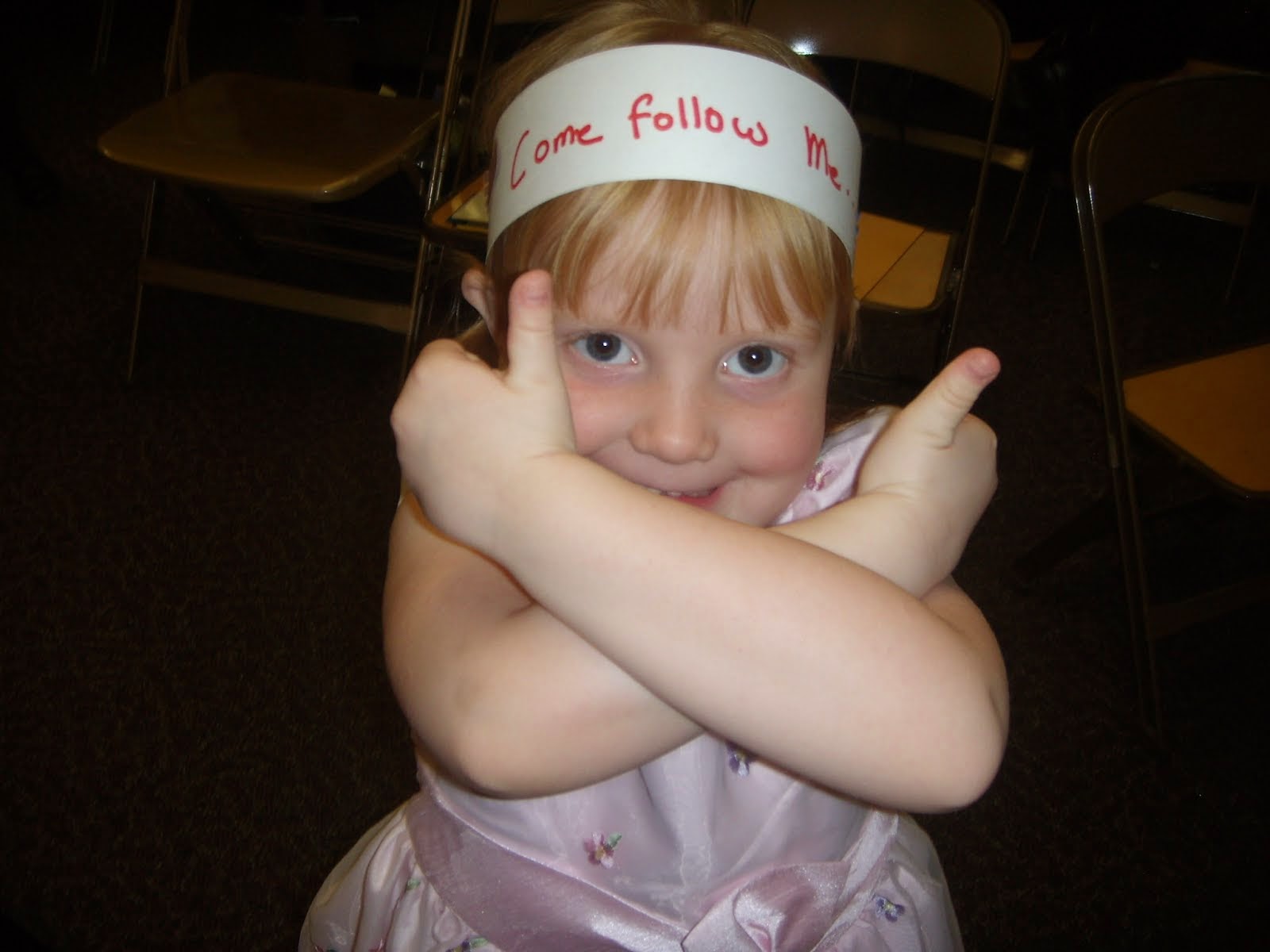 What to sing with the nursery kids! 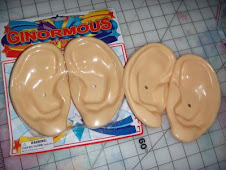 Need a quick idea for today? Do this! 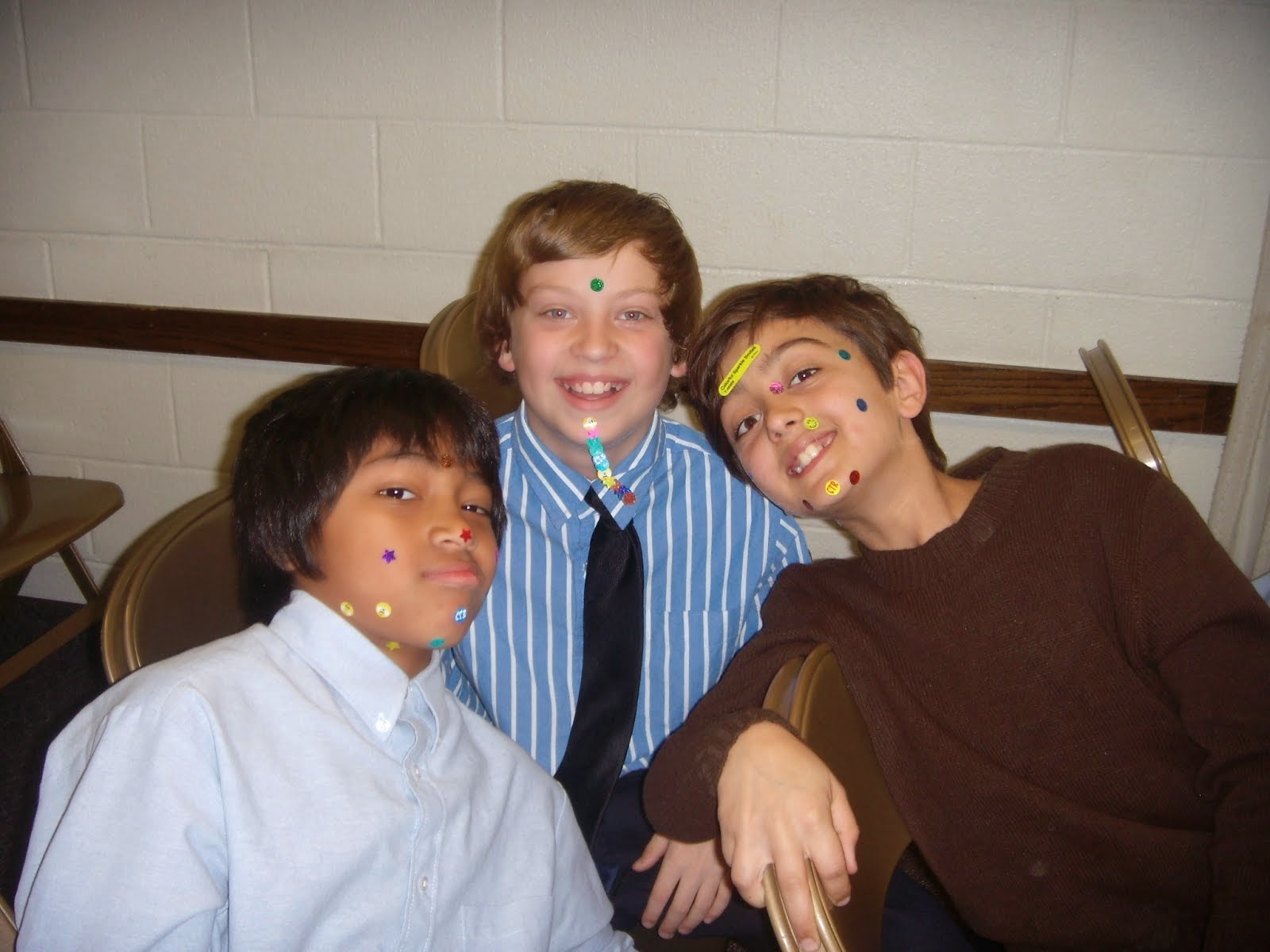 Fun for anyone alive! Including 11 year olds!

3 Ways to Teach a Primary Song 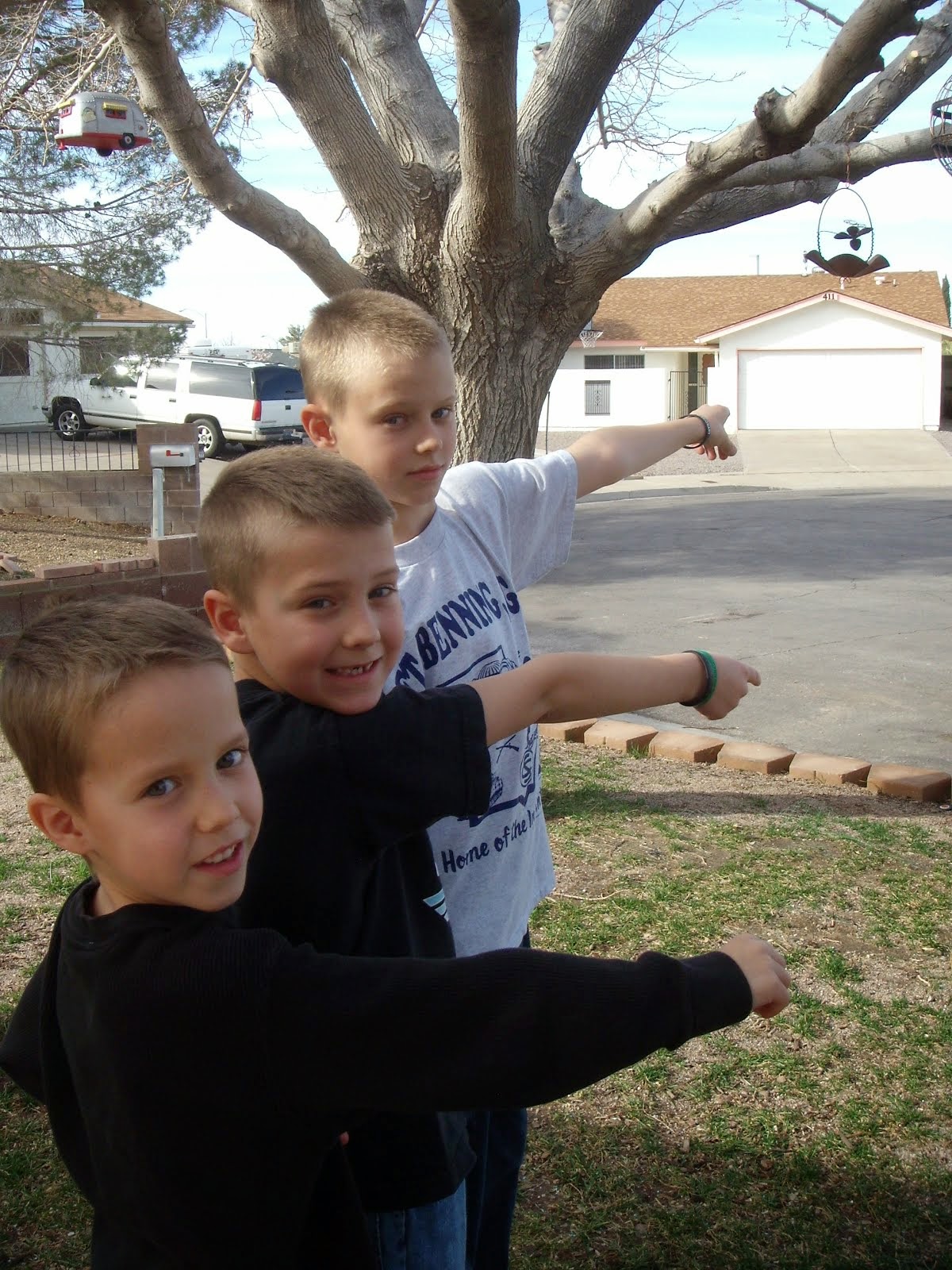 Pick a Song from the Song Bag! 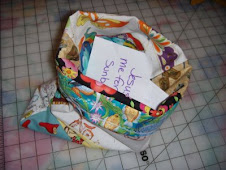 Stand up/Sit down as you sing 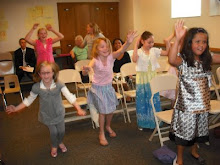 My apron is a bonnet 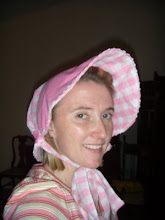 My bonnet is an apron 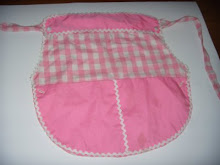 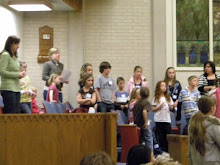